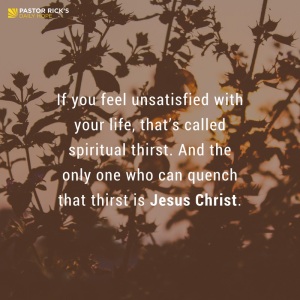 Have you ever been thirsty?  I don’t mean the average thirst where a drink of water tastes good after a long walk or after working outside on a summer day. I mean really — really thirsty…where your tongue sticks to the roof of your mouth and all you can think about is water.

Story from the internet:

In 1996, a young marine corporal named Joey Mora was standing on a platform of an aircraft carrier patrolling the Iranian Sea.   Incredibly, he fell overboard.  His absence wasn’t known for 36 hours.   A search and rescue mission began, but was given up after another 24 hours.   No one could survive in the sea without even a lifejacket after 60 hours. His parents were notified that he was “missing and presumed dead.”

The rest of the story is one of those “truth is stranger than fiction” things.  Four Pakistani fishermen found Joey Mora about 72 hours after he had fallen from the aircraft carrier. He was treading water in his sleep, clinging to a makeshift floatation device made from his pants — a skill learned in most military survival training.  He was delirious when they pulled him into their fishing boat.  His tongue was dry and cracked and his throat dry and scratchy.

About two years later, as he spoke with Stone Philips of NBC Dateline, he recounted his unbelievable story of will to live and survival.  He would not give up.  He said it was GOD who kept him struggling to survive.

His discovery by the fishermen makes searching for a needle in a haystack a piece of cake.  The most excruciating thing of all?  Joey said that the one thought that took over his body and pounded in his brain was “I’m thirsty, I want some water!”  Even though he was surrounded by an ocean of water. Have you ever been thirsty like that? He was surrounded by the wrong water. Like the water the enemy puts in front of us. It might look good but it isn’t.

As the hart panteth after the water brooks, so panteth my soul after thee, O God.

2 My soul thirsteth for God, for the living God: when shall I come and appear before God?

6 I stretch forth my hands unto thee: my soul thirsteth after thee, as a thirsty land. Selah.

We need to grab a hold of that type of spiritual thirst! We gotta thirst for GOD and for spiritual living!

What was wrong with that crowd in that day is what is wrong with many people today. They were drawing water from the wrong well.

Too many times, we try to quench our thirst in all the wrong places. We drink from the worldly well instead from the well of life that’s found in JESUS. JESUS said if anyone wants a relationship with HIM, he can have it. If anyone wants spiritual living, he can get a hold of it. If anyone seeks GOD he can find HIM.

The problem with many people is they just ain’t thirsty for GOD and spiritual living. You see, before we can really have a close relationship with GOD, we’ve gotta thirst for GOD.