Today is Palm Sunday. It’s the day we remember and celebrate when JESUS entered Jerusalem as our Savior and our King. JESUS rides in on a donkey and a large crowd gathered and laid palm branches and their cloaks across the road, giving JESUS royal treatment. They shouted “Hosanna to the Son of David! Blessed is he who comes in the name of the Lord! Hosanna in the highest!” When the people shouted “Hosanna!” they were using it to express adoration, praise, or joy.

This day has a lot of significance for our lives today. It’s a very important day because that’s when JESUS started HIS journey that ended with HIM on the Cross. Lots happened in this week leading up to HIS death burial and resurrection. The palm branch represented goodness and victory and was a symbol of the victory HE would have over death.

HE knew it wouldn’t be long before some these same people that praised HIM would turn their backs on HIM and want HIM crucified.

Palm Sunday reminds us what is going to happen this week. JESUS rides into town being praised. Then when HE gets there HE finds people in the temple selling and buying. So HE throws them out and turns their tables over and tells them that the temple is HIS house of Prayer.

Then HE tells HIS disciples everything that’s going to happen. Man was looking for someone to fight their battles in that present day world. GOD had the ultimate plan of sending HIS SON to fight the final battle over death. This is the greatness of why we celebrate this week. Because of this ultimate sacrifice, we can be set free of death. Free from sin. To be free from everything the enemy throws at us. To be able to claim the Victory over everything.

Then at the end of the week HE took what is the last supper, also known as the LORD’S supper. They partook in what is known as communion. Then they went to the garden of Gethsemane where JESUS prayed. JESUS knew what HE was gonna go through.

32 Then they came to a place which was named Gethsemane; and He said to His disciples, “Sit here while I pray.” 33 And He took Peter, James, and John with Him, and He began to be troubled and deeply distressed. 34 Then He said to them, “My soul is exceedingly sorrowful, even to death. Stay here and watch.”

35 He went a little farther, and fell on the ground, and prayed that if it were possible, the hour might pass from Him. 36 And He said, “Abba, Father, all things are possible for You. Take this cup away from Me; nevertheless, not what I will, but what You will.”

37 Then He came and found them sleeping, and said to Peter, “Simon, are you sleeping? Could you not watch one hour? 38 Watch and pray, lest you enter into temptation. The spirit indeed is willing, but the flesh is weak.”

39 Again He went away and prayed, and spoke the same words.

Let JESUS direct our thoughts and attention to HIM every second of our lives because HE is what matters most.

Let’s always focus on worshiping the KING of kings and the LORD of lords, thanking HIM for HIS sacrifice, celebrating the power of the Resurrection, and the new and exciting life found in HIM alone. HIS NAME IS JESUS.

11 And when they came nigh to Jerusalem, unto Bethphage and Bethany, at the mount of Olives, he sendeth forth two of his disciples,

2 And saith unto them, Go your way into the village over against you: and as soon as ye be entered into it, ye shall find a colt tied, whereon never man sat; loose him, and bring him.

3 And if any man say unto you, Why do ye this? say ye that the Lord hath need of him; and straightway he will send him hither.

4 And they went their way, and found the colt tied by the door without in a place where two ways met; and they loose him.

5 And certain of them that stood there said unto them, What do ye, loosing the colt?

6 And they said unto them even as Jesus had commanded: and they let them go.

7 And they brought the colt to Jesus, and cast their garments on him; and he sat upon him.

8 And many spread their garments in the way: and others cut down branches off the trees, and strawed them in the way.

9 And they that went before, and they that followed, cried, saying, Hosanna; Blessed is he that cometh in the name of the Lord:

10 Blessed be the kingdom of our father David, that cometh in the name of the Lord: Hosanna in the highest.

11 And Jesus entered into Jerusalem, and into the temple: and when he had looked round about upon all things, and now the eventide was come, he went out unto Bethany with the twelve.

Palm Sunday is when JESUS comes riding into Jerusalem on a donkey. Can you imagine what it must have been like on that day? All of those people got together to see HIM. They’re shouting Hosanna, Hosanna. The ONE that people were looking for. Thousands gave HIM praises. There were lots of followers of JESUS for about three and a half years. They saw JESUS doing miracles, healing the sick, casting out demons, raising the dead. They believed HE was the Messiah that the prophets spoke of. And now they are ready to crown HIM as their KING.

They began the week saying JESUS is KING and ended the week rejecting HIM. These same people that shouted “Hosanna in the Highest” were gonna shout “Crucify HIM”.

HIS disciples who argued who was going to be the greatest and sit next to HIM in the kingdom were now forsaking HIM. Peter, who once understood HIM to be the CHRIST was now denying HIM three times.

37 But though he had done so many miracles before them, yet they believed not on him:

38 That the saying of Esaias the prophet might be fulfilled, which he spake, Lord, who hath believed our report? and to whom hath the arm of the Lord been revealed?

Peter never thought he would deny the LORD. He said he would die for HIM. What about us?  How strong is our belief?

6 As ye have therefore received Christ Jesus the Lord, so walk ye in him: 7 Rooted and built up in him, and stablished in the faith, as ye have been taught, abounding therein with thanksgiving. 8 Beware lest any man spoil you through philosophy and vain deceit, after the tradition of men, after the rudiments of the world, and not after Christ.

There are lots of people who got a taste of the Truth but because of the fear of man and the fear of being rejected by people or being made fun of, they never confess what they believe.

Peter denying JESUS three times was because he was afraid. We should never be ashamed of the Gospel or what people might say or do to us because we believe in the one true living GOD and HIS name is JESUS. Stand strong in your beliefs and always know you are protected by JESUS. We must be able to boldly confess what we believe. The apostle Paul said, “I believed and therefore I spoke”. We must do the same.

Lots of people don’t want to tell people about JESUS because they’re afraid of what it will cost them. Many people stay in bondage to traditions, because of fear of losing their friends. Because of this, their faith is weakened instead strengthened. 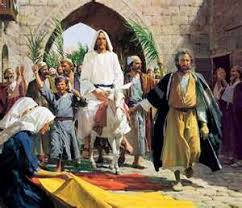 Praise the LORD everybody. There was a very strong presence of the LORD at church service. Today is a celebration of Palm Sunday. Many people back in the day followed JESUS to Jerusalem. They covered the donkey and the ground with their cloaks which is a sign of submission. They waved palm branches as a sign of victory. They shouted Hosanna which is a shout of strong and worshipful praise to GOD. A lot of folks followed JESUS, yet a few days later some of them were yelling to crucify HIM.

We need to make sure we always follow JESUS until the very end. We’re running a race with JESUS right besides us. HE tells us to follow HIM in: Matthew 4:19 “And he saith unto them, follow me, and I will make you fishers of men.” Matthew 16:24 “Then said Jesus unto his disciples, if any man will come after me, let him deny himself, and take up his cross, and follow me.” Also in John 8:12, John 10:27; John 12:26.

We can never go wrong following JESUS because HE will never leave us nor forsake us, HE sticks closer than a brother, and HE is right there at the mention of HIS NAME. Great things happen in your life as you follow the King of kings and the Lord of lords.

So stay focused on JESUS and let HIM lead you where HE wants you to go. Don’t forget to tell someone about JESUS!