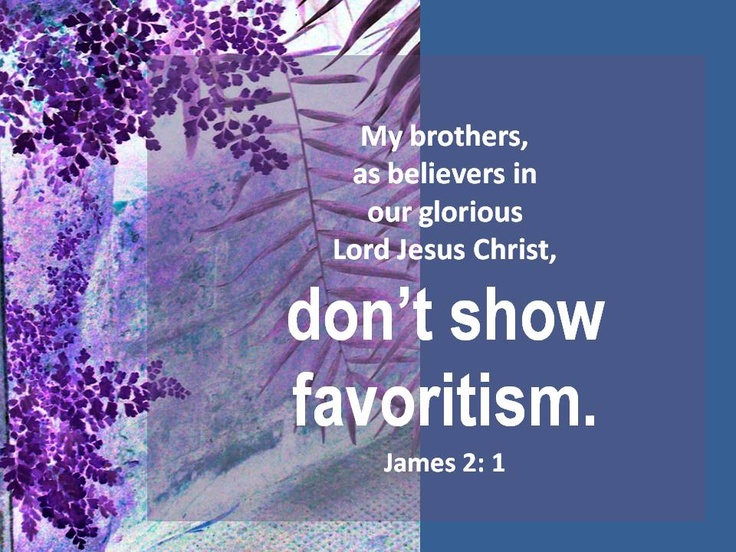 James 2:1-4, “My brethren, have not the faith of our Lord Jesus Christ, the Lord of glory, with respect of persons. For if there come unto your assembly a man with a gold ring, in goodly apparel, and there come in also a poor man in vile raiment; And ye have respect to him that weareth the gay clothing, and say unto him, Sit thou here in a good place; and say to the poor, Stand thou there, or sit here under my footstool: Are ye not then partial in yourselves, and are become judges of evil thoughts?” Recently I saw a story on Facebook that was very challenging, it was about an old homeless man who was attempting to go to church one day, and as he approached the building was told by the ushers that was not welcome and could not enter into the church because he would cause a distraction. He went to the side of the building where he tried to listen through the closed doors and windows and a young man then came and sat beside him. The young man asked him what he was doing and the old man explained that he was too filthy, clothes too worn to be allowed into this church. He then introduces himself and the young man tells the man his name is Jesus and that he was not allowed into this church either.

This would be a sad story but as I searched the internet I had found that some people have been expelled from churches not because of sin but because of not fitting into what the leaders in their narrow view of what a Christian is and is not. A Georgia Baptist church had banned a sick 92-year-old parishioner after attending for 50 years because she was not able to pay tithes to the church. A 103 year old woman in Elberton had her membership revoked because she did meet the new pastors idea od how a person at his church should be.

I would be the first to admit that God had to work on me for quite a while to get me to the place that I am today and no doubt God will be continuing to work on my misunderstanding of what a Christian should or shouldn’t be. Jesus had to point this out many times to His followers such as the story in Luke 14:15-24 about the wedding supper. The ones that were invited to the supper turned  it down for foolish reasons the master of the feast told the servant to go out quickly into the streets and lanes of the city, and bring in hither the poor, and the maimed, and the halt, and the blind. He then was told to go out to compel all he could to come to the supper. The apostle Peter had  to learn a lesson about discrimination in Act 10 where God gave him a vision of a sheet filled with all kind of beast and creeping things and was told to eat. Of course Peter being a Jew would not eat and was told in the vision that what God has made clean is not common. This happened three times then as he awoke the spirit told him that three men would come and he was to go with them. These had been sent by Cornelius and when Cornelius met Peter he, he told Peter that he had a vision in which he was to have Peter come and speak to them. this is peter’s reply in verse 24, “Then Peter opened his mouth, and said, Of a truth I perceive that God is no respecter of persons:”

It’s imperative that we have open arms to all who God sends our way after all we are all are just a bunch of sinners that have been saved by God’s grace!